We connect home buyers and sellers with real estate professionals in Walnut Creek and many other California Cities.

Embraced for its mild Mediterranean climate and picture perfect setting at the foot of Mount Diablo, Walnut Creek offers a distinctive blend of urban flair, suburban grace and peaceful wilderness. The highly acclaimed Lesher Center for the Arts is the East Bay destination for professional theater and nationally recognized dance, music, and entertainment.

LDS Members make up 2.07% of the population in Walnut Creek. The state of California has the largest LDS population outside of Utah. California has 768,344 members in 1,348 wards and branches, 16 missions, and 7 temples and 189 Family History Centers.

Latter-day Saints have played important roles in California History. A group of a few hundred LDS converts from the Northeastern United States and Europe arrived at what would become San Francisco in the 1840s aboard the ship Brooklyn, more than doubling the population of the small town. The Pleasanton LDS Stake, 675th stake of the LDS Church, was created on 8 Dec 1974 with Dale Edwin Nielsen as first stake president. 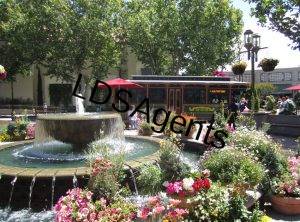 Want the outdoors? Grab your boots or mountain bike and explore the region’s incomparable beauty, with 105,000 acres of accessible open space and 520 miles of trails for hiking, biking and horseback riding. Walk a round of golf, swim laps in the pool, or play a game of tennis at city-owned recreational facilities under Walnut Creek’s sun-drenched skies.

Walnut Creek’s total estimated population, as of 2011, was 65,211. It is located 16 miles east of the city of Oakland in the East Bay region of the San Francisco Bay Area. Although not as large as neighboring Concord, Walnut Creek serves as a hub for the neighboring cities within central Contra Costa County.